The Legions of The Damned 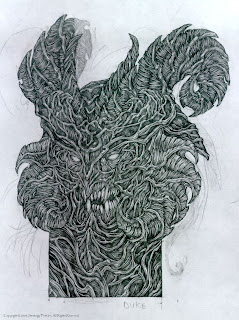 Long ago, before evil sundered even the heavens, the Highfather looked upon the beauty of the angel Bethrezen and granted him the divine right to create the world, which was to be called Nevendaar. And Bethrezen did. His world was magnificent, and its inhabitants wanted for nothing. But rancor grew among the lesser angels who, in a pique of jealousy and rage, sowed disharmony and ill-will among the hitherto peaceful tribes of Nevendaar.

When the Highfather looked down upon Nevendaar, he was aghast. Where was the harmony that Bethrezen had promised? Where were the endless green pastures? The Highfather saw only suffering and strife; the green pastures were scorched black by ceaseless wars.

After 6,000 years of imprisonment in chaos, Bethrezen’s earthly minions – the Legions of the Damned – created a breach in their master’s dungeon. All that remained was to perform the final ritual that would grant Bethrezen unbridled freedom. But the Highfather, in his infinite mercy, revealed the location of the abominable ritual to the Empire and the Mountain Clans.

The Legions of the Damned were trapped in their mountain temple, and the secret rune wisdom inscribed on the door would ensure that they would remain there for ten years.

Now, that ten years has passed, and the Legions are free to perform the rites that will free Bethrezen once and for all…