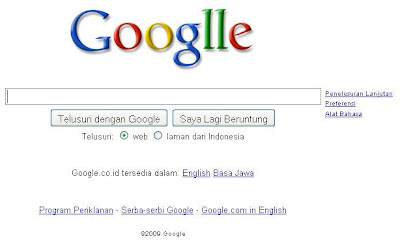 Can you create and design the 12th or perhaps the 13th??? I really love to design or just manipulating image especially with logo or emblem. But with the Google logo, I still stuck with my idea... Oh, almost forgot, you can review the Google's history in this link. Anything about Google, from 1995 - 2008. From the meaning of Google, did you know that Larry and Sergey decide that the BackRub search engine needs a new name. After some brainstorming, they go with Google – a play on the word “googol,” a mathematical term for the number represented by the numeral 1 followed by 100 zeros. The use of the term reflects their mission to organize a seemingly infinite amount of information on the web. Google, the best industry i ever know!